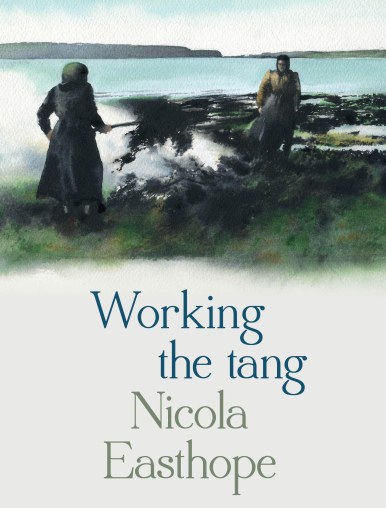 The endnotes of Nicola Easthope’s recent volume reveal some aspects of Norse mythology to the uninitiated. Off the Orkney Islands, at the bottom of the Swelkie whirlpool, there is a witch who turns the great mill-wheels and keeps the planet salty.

Although Easthope might usually be found on the Kāpiti Coast, this appears to be a sly reference to her other dwelling. With all the salt and motion Working the Tang brings into the world, it is safe to say Easthope is that witch.

The volume’s early poems are enmeshed with family histories and visions of a Pākehā ancestral home in the vicinity of the Orkney Islands. But this land is not the temperate twin of Hawaiki; it is cold, salty and bloody. But there is much mystery and song to be discovered there. Easthope’s writing is distinctly Pākehā. She necessarily defines her identity in terms of a relationship with Māoritanga and Te Tiriti. Easthope does not shy away from the horrors and ongoing injustices that colonialism and eurocentrism has frequently wrought on Māori. These are not ‘NZ/European’ poems.

hoodie boy lights up in salute. He inhales,
but his lungs empty out through his eyes.

Easthope will put your extensive knowledge of New Zealand geography to shame. Have you been to Ōkārito? What of Andaman, Pōrangahau, and Kiriwhakapapa? Ah, but have you been held up by the traffic controllers at Torea Street? I strongly suspect the author is the innovator behind the Dulux Colours of New Zealand paint range. The major clue is found in a bucket of Ōkārito NZ9H7 (a respectable, soft grey tone).

Some of the most striking poems seem to take their leave off the page. Verbs vault and images rise. “Man at the Kerb” and “Boogie” demonstrate this best. ‘Shimmy’ might be the second most frequent word in the volume, coming in just after ‘salt’, of course. “Hot” is a delicious ditty full of affection, steam, and coffee.

In two standout poems, “Week’s End” and “What Shall We Write on the RAMS Form?”, Easthope masterfully probes the psyche of the teacher. If I were a member of the House of Medici, I’d commission an entire volume of her teaching observations. It’s a treat, reading the narrative voice as they radically empathise with the unique shortcomings of each student, and fret over the possibility of lunch-stealing weka.

I am 23. Children mystify, amuse, and terrify me. The concept of parenthood is filed away in my in-tray labelled ‘non-urgent matters you can just pretend don’t exist’. But a few of Easthope’s knowing tales can almost make a jaded millennial partial to the concept.

My son is such a deliberate tūī.
Flipping, falling out of his tree.
My son is Larsen C calving away.
(“Crouching Tiger”)

The image of diminishing glaciers in the last line fittingly calls to my mind the imminent threat of environmental collapse, and its discouraging influence on the concept of child-rearing. Anyway, if it’s not too late already, I’ll let the readers make up their own minds about whether they want to bring children into the Anthropocene.

Easthope condenses hundreds of years of ancestral history, and the identity that comes with it, into something tangible and salty. She conjures strong images from her personal experiences as a Pākehā living in Aotearoa, as a teacher, and as a parent. Reading this volume, I felt like I got to speak with Easthope personally as she shared poignant anecdotes of her life. And that is a treasure indeed.

Joseph Robinson is a librarian based in Wellington who likes off-white roses and silk shirts. He posts some of his musings on Instagram: open_tabs_infinite.