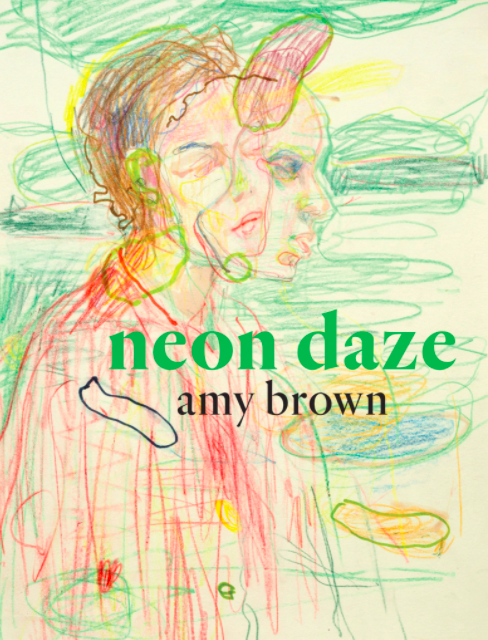 Neon Daze is a self-described ‘verse journal of the first four months of motherhood’. And it is exactly that. It is an extraordinary diary with daily entries that capture the elation, pains, and sheer terror of childbirth, as well as the early days of motherhood. And Amy Brown does this with nuance; she has it spot on. It’s not always a comfortable read as it doesn’t shy away from brutal realities, as shown through this description of an emergency caesarean:

And then, at last, under the stage lights
you’re halved like any leggy assistant about to be sawn
… The magician wears a plastic shield over
his glasses – you know why.
(“13 August 2016”)

And just over a week later:

In the shower
my hand doesn’t mean to brush what feels
like meaty cross-stitch.
(“22 August 2016”)

Beginning with the birth of her son Robin, we follow Amy’s journey of discovery and disbelief:

This day begins early
when seven kilos you’ll lose
by its end starts to leak
and your abdomen begins
to speak in a voice that books
and friends recommend you
control as soon as you hear it.
(“13 August 2016”)

It goes on to capture, with heart-wrenching accuracy, the movements of a newborn the mother can’t take their eyes from, and the infant’s new world of wonder:

he senses the right
place to anchor himself and drives
forward with all the power
a minutes-old nick can possess,
as if the nipple and aureole were prey
about to escape
(“14 August 2016”)

The collection moves on to the quickly dawning enormity of parenthood, and the slap-in-the-face sense of responsibility that is thrust upon the new mother. One might know it was coming, but one could have never understood the magnitude.

I lay him against my thighs and,
eye to eye, we both recognise something awful – that I am his best
chance
(“15 August 2016”)

As a mother myself, with this period in recent enough memory, I can authoritatively say that Brown captures, with fragility and honesty, the experience of new motherhood. How this book would read to someone who is not a parent, I can no longer say. It might educate, or it might be meaningless. But I can’t go back to that pre-motherhood world and imagine what it might be like to read this book without my experience.

I recognise the constant sleep deprivation:

Plus the tedium and desperation of trying to encourage a newborn to sleep:

A shush might be enough,
if associated with his cot.
Yet here I am lurching
like the bus in Speed and
whistling a breathy prayer
that you will sleep. And then
what? Will I sleep too?
(“31 August 2016”)

And with poignancy, Brown captures the essence of being totally overwhelmed, being drained to the point of hopelessness and, finally, an inability to speak.

Why are you crying? he asks
when we brush our teeth. I tell him I am
tired. He says, You are allowed to be tired,
but that is no reason to be upset. I say,
You don’t understand how this works.
He says, Yes, but I don’t know what
you expect me to do. I say, Nothing.
(“5 September 2016”)

There are countless examples of Brown’s tender representation of this most extraordinary time in one’s life. Although it portrays pains, fears, and hardship with crystalline honesty, it also captures the beauty and wonder of this new-forming relationship: the mother-child bond.

But, this brilliant symbiosis we possess

ensures that my front fills up with river
stones if we go too long apart. Early
this morning, 4.30, I woke

to find myself lying on a pile of pebbles
leaking river water and debated with myself
about whether to let you keep sleeping —
whether you needed me as much as I
needed you then. I swear I didn’t make a sound,
but a moment after I woke, you yelped…
(“4 November 2016”)

However, one feature I found distracting were the footnotes throughout the collection. The footnotes provide, not just, a platform for definitions of certain words, but a stage for additional stories and anecdotes. Although often witty and informative, one could never quite decide whether to read them at their first appearance in the poem, or to wait until the end of the day’s entry. Either way, the footnotes took me away from the world of Robin and parenting, a world that I had to try and re-enter. They made too much noise. Perhaps, however, they represented the sleep-deprived mind, darting in and out of thoughts.

Neon Daze is an extraordinarily brave book for Brown to have written, on a deeply personal experience. Brown humbly says in her acknowledgements that ‘Neon Daze records one unremarkable experience of the commonest phenomenon’.  That is true; it does that. Brown goes on to say that ‘Millions of women have been through those months without feeling the need or right (or having the time or health) to make a noise about it’. To that, I would add — or the courage. Time and health are doubtless major factors, but sharing what is an intensely vulnerable time is valiant. So thank you to Brown for meeting the challenge. Although millions have experienced this, it is a rarely shared, oddly taboo subject, and it is refreshing to hear the similarities across experience. A must-read for Mums or Mums-to-be, and anyone interested in the enormous beauty of ‘the commonest phenomenon’.