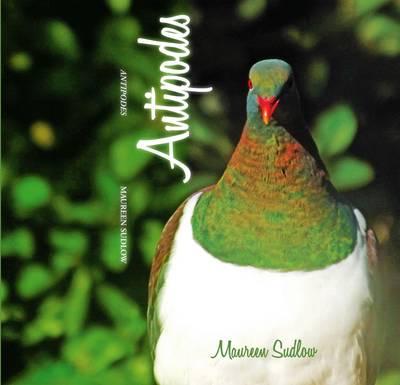 Antipodes by Maureen Sudlow is a love letter to the rugged essence of rural New Zealand; the openness of a clear sky at night, the grandeur of rolling hills and fields, and the sublime power of weather. Sudlow’s work is grounded in nature, and she masterfully uses this as a platform to describe the human condition.

Trying to explain this collection has proven to be a difficult task. Sudlow’s brilliant writing invokes a strong sense of nostalgia. Many of the works are specific to Sudlow’s own life. But the way she skillfully captures the essence of these moments enables the reader to invoke their own experiences, including experiences that may have previously been lost. My own realisation of this came while reading “Fences”:

no picket fences
white and neat
netting, sweating
got me beat
(“Fences”)

Growing up as a child of the 90’s in rural New Zealand, the things I saw on television did not reflect my life. Suburban houses in neat rows, separated by white picket fences, were as alien to me as the stars that I saw above my home at night. In Antipodes, Sudlow does away with the urban narrative, choosing instead to mix nature with the human experience. This is reflected in her work through images of fields, mountains, and animals that roam while waves crash upon beaches of rock. This results in vivid, lively, and at times, overwhelming imagery. But above all, it is familiar. Here Sudlow shows incredible technique by using her own experiences to engage with the reader’s. The memories may be hers, but the voice she uses to speak them with is a universal one.

Perhaps most important to note, Antipodes is not always filled with happy nostalgia. Sudlow covers a range of experiences. Pain, fear, and grief are all present in this collection, just as they are present in life. Sudlow does not shy away from this pain, deciding instead to embrace it. One work, “Threnody”, captures this well:

We lifted your coffin.
You were light,
already missing,
the husk of a seed
winnowed by wind.
(“Threnody”)

Sudlow also suggests that loss is not an endpoint. The waves will still lap at the shore, the thunder will still rumble, and the mountains will remain. These feelings are not to be avoided – to deny them is to deny the existence of others, and ourselves. Sudlow uses the juxtaposition of presence and nature against loss and despair to convey one simple truth: it is all a part of life. She captures a range of emotions with vivid language in conjunction with the familiar setting of Aotearoa. While Antipodes was difficult to grasp at first, I am glad to have read this collection. If you’re looking for poetry that covers a spectrum of emotions and experiences, all within a New Zealand context, then look no further than Antipodes.

Alex Lister is a postgrad at Otago University, who uses poetry as a productive means of procrastination.