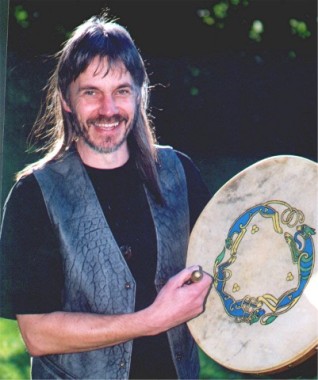 Tony Chad lives in Whiteman’s Valley, Upper Hutt, where he endeavours to find the best balance of paid employment, the arts and a subsistence lifestyle. He is editor of monthly poetry magazine Valley Micropress, helps organise poetry and other arts events and hosts a “what’s on” Access Radio slot.

His CD of original songs Sun Over Kapiti has sold over 800 copies, but he is probably best known for performances with his Irish band Finn McCool. Tony’s haiku have appeared in various anthologies and journals and one is inscribed on a boulder on the Katikati Haiku Pathway. His work appeared in a taste of nashi, the 2008 New Zealand haiku anthology. Contact Tony.

on the parched earth
hawk’s shadow:
war-planes over Iraq

putting on weight
the one-walk-a-week dog
from Paekakariki

on the deck
abandoned dog biscuits –
and a marble

your tears at the airport
now it’s raining
in LA

your “freedom” –
costing us
the Earth

our last day
together
first daffodil

after the storm
a fallen pine –
first flower on the kowhai

your tears at the airport: A Savage Gathering (NZPS anthology) 2000.