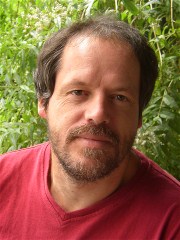 Owen Bullock began writing haiku in 1999 and has published four collections, Wild camomile (2009), Breakfast with epiphanies (2012), Urban Haiku (2015) and River’s Edge (2016). He is a former editor of Kokako, New Zealand’s only specialist haiku magazine, and was one of the editors who produced Take Five: Best Contemporary Tanka, Vol IV (2012).

Owen holds a PhD in Creative Writing from the University of Canberra where he currently teaches. Visit his podcast website to hear about Owen’s latest research. Contact Owen.

tapping
the boatshed wall
a boat

a giant rimu falls
within an hour
rain

years later
off the pier
the same few boys fishing

ex-junkie –
two bags
in his teacup

into the stillness
a neighbour shovels
gravel

shadows
on the chess board
becoming fewer

another accusation the sky is purple

into the stillness: ibid.

an ambulance: moments in the whirlwind (NZ Poetry Society anthology) 2009.