Despite the rain (it was worse 10 years ago) a good-size crowd ventured out to join the fun in Katikati’s Memorial Hall to celebrate the 10th anniversary of the pathway’s official opening.

The event included a display of ikebana inspired by some of the pathway’s haiku, a bonsai display, a have-a-go origami table, an explanation of some of the traditions surrounding the kimono, and a performance by the Wai Taiko drum group from Hamilton.

The organisers were honoured to have among the guests for the celebration: Mr Hachiro Ishida, the Consul-General of Japan in Auckland, and Mrs Ishida; Deputy Mayor of Western Bay of Plenty District, Sam Dunlop, and Mrs Dunlop; The Right Honourable Sandra Goudie, MP for Coromandel; the president of the New Zealand Poetry Society, Laurice Gilbert, chairman of the Katikati Community Board, Bruce Duske, and pathway poets Patricia Prime (Auckland), Tony Chad (Wellington), Shirley May (Tauranga), Catherine Mair (Katikati), Sandra Simpson (Tauranga), and two of the new additions to the pathway family – Margaret Beverland (Katikati) and Vanessa Proctor (Sydney).

Vanessa Proctor (left) and Margaret Beverland both had haiku selected for the 10 Poems for 10 Years project. 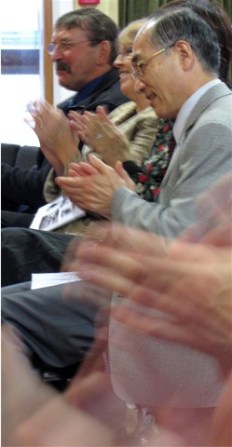 Applauding the performance by Wai Taiko are, from back, Sam Dunlop, Sandra Goudie and Hachiro Ishida (Mrs Ishida is obscured).

The following is taken from a speech made by Sandra Simpson, on behalf of the Katikati Haiku Pathway Focus Committee (haiku from the pathway collection read by Tony Chad):

The pathway story began in 1998 when Catherine Mair approached then-district councillor Ted Harris with her idea to create a pleasant riverside walk that incorporated haiku poems engraved on to river boulders.

Catherine provided the vision and a selection of poetry, Ted navigated red tape, Highfields developer Keith Downey got in behind the plan and he and the council helped create the reserve, while Creative New Zealand provided the funding for what became an official Millennium Project.

The pedestrian bridge, which was specially designed for the pathway, was blessed at dawn on January 1, 2000, and the pathway itself was officially opened on June 4, 2000 with a ceremony in this hall [Katikati Memorial Hall].

It would be appropriate at this moment to acknowledge the early supporters of the pathway who are no longer with us, among them Janet and Ted Harris, June Carlton and from our family of poets Bernard Gadd, Jeanette Stace, William Higginson, Cecily Stanton and Denver Stull. Without their enthusiasm and support, the pathway would not be what it is today – a tourist attraction, a place of leisure and pleasure, a place to exercise, a place for community events, a place to enjoy the natural world in the centre of a bustling town.

morning walk …
the old dog and I
both limping

When the pathway opened there were 24 engraved boulders – there were three more added in 2004, another three in 2007, a poem plaque on the haiku street sign in 2008 – and this year the committee has undertaken a project, 10 Poems for 10 Years.

We have so far received funding from the Perry Foundation, NZ Community Trust, the Mural Town Twilight Concert Committee, Katikati Rotary and, just in the past few days, from Bay Trust, which will enable us to complete boulders 8 & 9 – almost there.

beneath the moon
the heron’s slow step
towards frog-sound

Just 20 minutes ago Paul Gautron, the stone mason who has been engraving our 10 boulders, offered to donate the work on the final boulder, so we really are there … almost! It’s the perfect birthday present, thanks Paul.

I say almost, because late in April, thanks to the generosity and foresight of the council’s parks department, we were given an 11th boulder for engraving and that sits behind the library. An exciting surprise.

Katikati is a small town that makes things happen – we’re here today to celebrate a project that melds a component of Japanese culture with a New Zealand setting and comes up with something special.

hometown visit –
I fill my pocket
with acorns

We couldn’t have created this wonderful day without help. Thanks go to the Sogetsu Study Group in Tauranga for their ikebana flower arrangements, Poppie and Adriaan Englebrecht of Fern Valley Bonsai, Claudia Gorringe from Standards of Excellence for her Zen Clips topiary, Ayuko and Akiko for sharing their origami skills, Wai Taiko drummers, the cultural group who will help us dedicate the boulders, Katikati Lions for their manpower in helping us set up the hall and to committee members Di Logan and Elaine Fisher who have co-ordinated this birthday party that is free, courtesy of grants from Creative Communities, Western Bay and Tauranga, and the University of Waikato which has supported the appearance of Wai Taiko.

Ikebana inspired by Ronald Rubin’s haiku: above the flood plain / a double rainbow / promises promises The arrangement also featured two water-filled dishes on the table, one black, one white with white petals floating in the black dish.

An ikebana version of scattered / across water – / parts of the sun by John O’Connor.

The winners of the 2010 Katikati Haiku Contest were presented during the course of the afternoon – Laurice Gilbert presenting certificates and prizes and Tony Chad reading the poems of those who could not be present.

Thanks to Katikati Advertiser and Catherine Mair for the cash prizes, and Sandra Simpson for the book prize for Best Local Haiku.

a moment before sunrise –
ice singing
beneath the swans’ feet

he leaves in an ambulance –
the chrysanthemum buds
closed tight

evening walk
at the top of the hill
the loudest bird

between the gaps
a crab hole
changes colour 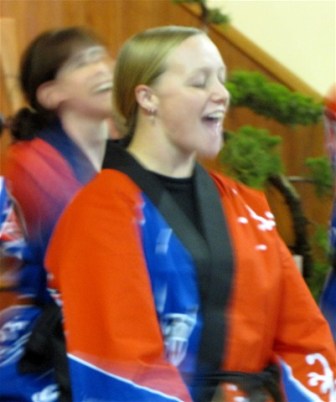 The sheer exuberance that is Wai Taiko.

Rain, in Maori tradition, is seen as a blessing so we put up our umbrellas and made the short trip to The Landing, the place where the town’s Ulster Irish settlers first stepped ashore into their new home. The boulder carrying Vanessa Proctor’s haiku stood in as representative of all the new engravings and was blessed by a kaumatua (elder).

Mary Parkinson, a volunteer who has established a butterfly garden at Te Puna Quarry Park, has overseen the release of 1000 monarch butterflies this past breeding season and she very kindly ensured that we had half-a-dozen to release at the boulder carrying Paul MacNeil’s haiku. However, because of the rain they didn’t want to fly and Mary didn’t want to leave them out in the weather, so she carefully packed them away for release on a nicer day. The butterflies are tagged in an effort to track their over-wintering habits. The council has kindly paid for butterfly food plants near the rock to try and make the poem a “living haiku”. 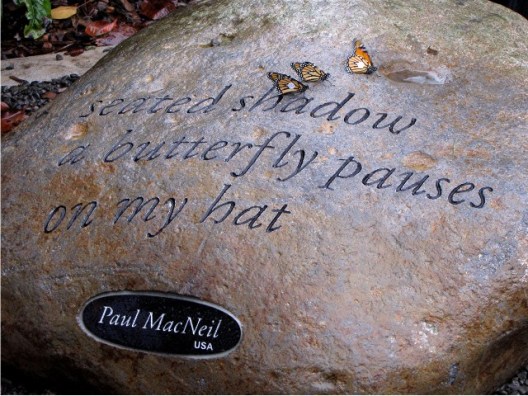 Monarch butterflies were released on to Paul MacNeil’s new poem.

Cyril, John and Jim are all already members of the pathway family – Cyril will now have two poems on the pathway, John three and Jim two. 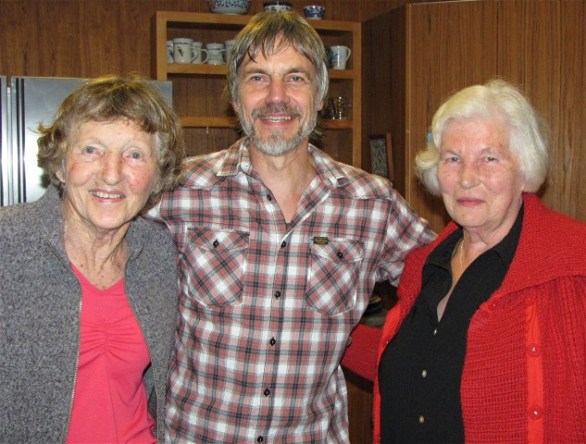 Enjoying a get-together after the function, from left, Catherine Mair, Tony Chad and Patricia Prime.