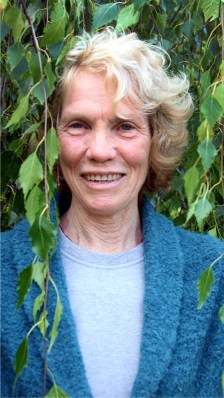 Katherine Raine has worked internationally as a landscape architect and garden historian, including two years in Japan. These days the sound of home for her is the roar of the South Otago surf. Though she first encountered haiku in a tiny book in her Christmas stocking at age 16, her own haiku and tanka have appeared only since 2010. She is working on a book of haibun and haiga featuring her photography. Contact Katherine.

bringing
this sky inside
breath

heat of the night
the folded stillness
of a rescued moth

between road and bay the old forest one tree wide

pear blossom
where the old white horse
used to stand

from my hand into the parted earth small seeds

approaching summer
the paths of the cattle
through the dew

new moon and star
just the slightest curve
of her belly

surf mist
the salt of a grief
without tears

from my hand: Third Prize, NZPS International Haiku Competition, 2013 and published in Given an Ordinary Stone (NZPS, 2013).

new moon and star: Finalist, the Janice M Bostok haiku award, 2012, and published in Evening Breeze, the anthology of the contest.