A personal view by Sandra Simpson

The Queen Mary ocean liner sailed off on her maiden voyage from Southampton to New York in 1936, named for an English-born princess with a German title who married the second son of the British royal family after her intended husband (the oldest son) died. She is also notable for amassing a large collection of fabulous jewels during her lifetime – and wearing a great many of them all at once!

The liner, considered a byword for luxury and elegance, became a troop carrier and hospital ship during World War 2, resuming her passenger service in 1947 before being retired in 1967, thanks to the new-fangled airline business, and was bought by the city of Long Beach in California for $3.45 million.

Between 1967 and 1971 she was refitted as a permanently moored hotel, convention centre and tourist attraction and from August 14 to August 18, 2013 was the venue for the biennial Haiku North America which this year was the largest in the conference’s history with 136 attendees. (The conferences began in 1991 and four people who attended that first one were also at this year’s event.)

Haiku North America was devised to be an event independent of any organisation or haiku lobby group. Its three directors – Michael Dylan Welch, Garry Gay and Paul Miller – were all present. Michael has recently been named as Poet Laureate of the city of Redmond in Washington state. David Lanoue, newly elected president of the Haiku Society of America, attended, as did Michele Root-Bernstein, associate editor of Frogpond, the HSA journal.

Three New Zealanders attended (Margaret Beverland, Sophia Frentz and myself), three from Australia (Ron Moss, Jennifer Sutherland and Amelia Fielden) and with Angelee Deodhar from India and a good representation from Canada the Americans must have felt the presence of the Commonwealth. There were also at least three people from Japan at HNA, down on previous conferences. See a group photo here.

The conference theme was Intervals and the lead organisers – Debbie Kolodji and Naia – opened and closed the event with an explanation of the theme interspersed with a reading of haiku.

at the full moon’s
rising, the silver-plumed
reeds tremble

Two conference anthologies were prepared – Close to the Wind was the official anthology edited by Michael Dylan Welch and William Hart; while Kathabela Wilson co-ordinated an anthology for the Regional Reading, where poets are grouped by geographical areas and submit works that reflect their homes (and footnotes to help others appreciate the haiku).

Kathabela was one of the personalities of the Long Beach HNA – always a broad smile, often a skip or two, and generally a flowered hat. Her husband Rick Wilson, a professor of mathematics at Caltech, is a whiz on traditional flutes and seemed to have one from almost every part of the world. His musical accompaniment to several readings was delightful.

Kris Moon, an American who is a long-time resident of Japan, hand-painted fans with haiku from the Regional Reading anthology and gave them to the poets, a very special and thoughtful gift.

The conference programme was packed with events – readings, presentations, speeches, workshops and the launch of the handsome book, Haiku in English: The First Hundred Years, edited by Jim Kacian, Philip Rowland and Allan Burns. 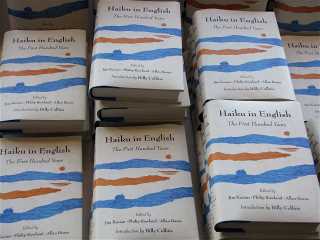 Jim corralled Ron Moss (Australia) and Sandra Simpson (New Zealand) to read for the poets who weren’t present, believing that the “unusual” accents, to North American ears anyway, may give the audience a new way into the haiku. All I can say is that was equally pleasurable and nerve-wracking. 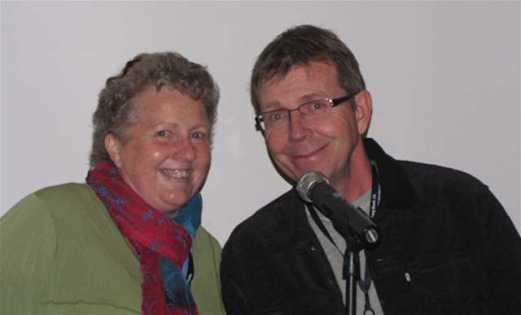 Some of the more difficult poems to read were those using organic forms … but it was also a lot of fun deciding how we might convey them. We shared the reading of Shawn McMurtagh’s “war” (see why on this page by scrolling down to the “sunglasses”).

After the conference opening on the evening of August 14, there was a deck reception for participants to mix and mingle – and I got my first sighting of the legendary Haiku Elvis (Carlos Colon) who was happy to pose with fans. Elvis also appeared at the conference closing, when he read some of his work, and Carlos explained The Path to Haiku Elvis as part of the Pecha Kucha session (the words are taken from the Japanese for chit-chat).

Jessica Tremblay, who organised the Pecha Kucha session on August 16, was the inaugural cartoonist-in-residence for the conference. See her HNA work at her Old Pond Comics website. She attended my talk on the Katikati Haiku Pathway, which drew a good-sized audience, and came up with this cartoon.

Cartoon by Jessica Tremblay (apologies for the poor cropping).

According to the back story of Old Pond Comics, Basho needed a frog and Kawazu (literally, “frog”) got the job, along the way becoming a haiku master. His apprentice is Kaeru (which also means frog in Japanese) and it’s his story that’s often told in her single-frame cartoons or strips.

There were several sessions dedicated to California’s early Japanese-American writers, something of a signature note for this HNA. I attended a presentation by “Sunny” Seki on the senryu of Japanese-American gardeners and was pleased to have snapped up his book on the topic when it appeared the day before as they sold out quickly.

Fortunately, Ron (Super-Haiku-Man) Moss was at the session on Itaru Ina where an elderly presenter (Itaru’s daughter) fainted and fell to the ground heavily. Ron is a volunteer firefighter in Tasmania and put his first aid training to good use until the paramedics arrived. The rest of the evening’s events were cancelled as a result of the drama. Ms Ina sent an email the next day reassuring everyone that she was mostly okay (a cracked rib and severely dehydrated).

But he wasn’t the only Mr Practical on board – when a waterfall suddenly erupted in a corner of the Royal Salon during the Einbond Renku Reading, Scott Mason had the presence of mind to move a recycle bin underneath it and shift the baby grand piano away from the spray, while others ran for Queen Mary staff.

Some of the more unusual sessions included horrorku (intervals of fear), twhaiku (haiku in the age of social media), waking the haiku mind with tai chi breathing, a group of pipers (on recorders) who set haiku to music, an original classical composition of a song cycle of haiku written by Japanese-American poets, a guided meditation workshop and a presentation on haiku and healing by two doctors and a professor of clinical psychology.

Sophia Frentz and I teamed up to present our thoughts on “The Science of Haiku”, analysing published work that uses science to illustrate a moment and yet remains poetry.

Charlie Trumbull, the former editor of Modern Haiku, delivered the William J Higginson Memorial Lecture on hoaxes in haiku – including Tao-Li who “burst on to the haiku scene in 1979 with a full-length collection and a form that shook the English-language haiku world”. Later revealed to be not an elderly Chinese gentleman but Evelyn Tooley Hunt, an established haiku poet (and an American female).

Charlie also delved into the haiku translations by Australian Harold Stewart, half of the prankster team behind Ern Malley, the poet supposedly undiscovered during his lifetime but who was later discovered to be a hoax. Stewart published several books of translations by a Japanese writer named Ho-o (ho, ho?) who also apparently never existed. Charlie thanked Lorin Ford for her help in researching in Australia.

In his paper on disjunction – the play between the possible and the impossible – in haiku Richard Gilbert started by stating that our understanding of Basho’s “old pond” haiku is based on a 300-year-old misunderstanding.

“It’s not a literal reality,” he said. “The pond was in Basho’s mind.” He and his disciples were apparently in his home “drinking” when Basho said (in Japanese): frog jumping in, water sound. A student provided a first line, but Basho rejected it and gave “old pond” (furuike ya), the “ya” cutting it away from the rest of the poem.

Richard also pointed out that kawazu (the “poetic frog” used in Japan) are tiny green frogs, “super-cute”, so small they would make no audible sound when they entered the water and that Basho’s famous hut was nowhere near a pond, old or otherwise.

“Basho’s ‘old pond’ opens the mind to the haiku cosmos,” Richard said. “One of the really great things about the modern haiku movement is that people have gone back to Basho and really looked at cutting technique. Strong cutting is a challenge to perception.”

And Richard takes back the term “gendai” that he introduced for avant-garde English haiku and which is now commonly used in the English-language haiku community.

He suggests, instead, H21 Haiku (h21 haiku) to mark a moment in history when new forms and styles have been collected and published.

The Editors’ Panel threw up some incredible statistics – Modern Haiku receives some 10,000 poems a year (one editor) and Frogpond receives about 12,000 (two editors). Stanford Forrester (bottle rockets) made a plea for no haiku about dolphins or rainbows (and no rhyming haiku), while Paul Miller (Modern Haiku) said he “can’t stand” haiku about writing haiku. So, you have been warned.

Amazingly, Stanford also said he had received death threats from people whose work he has rejected – and that he spends about 10 to 15 hours placing poems into categories before making a decision because it helps him “become more intimate with the poems”.

Apparently we’re all writing on “baby boomer” topics – care of aged parents, illness, retirement, being a grandparent – while some topics aren’t being addressed at all.

“Seeing people growing from submission to submission is like seeing a child grow,” says Fay Aoyagi (The Heron’s Nest). “Being an editor is paying back a tiny bit of what has been given to me by other editors.”

Paul Miller pointed out that not all editors have the same taste. “So if I don’t like it, and you believe in the work, send it somewhere else.”

Stand-out sessions for me were Jim Kacian (A Primer on Organic Form in Haiku), John Stevenson (A Few Well-Chosen Words) and Steven Carter (Haiku Before Haiku). The Memorial Reading, to honour poets who had died in the past two years, was especially well done, uplifting and moving. Many thanks to Linda Papanicolaou who so ably researched and presented the event. Among those honoured were Cyril Childs, Barry Morrell, Svetlana Marisova (all New Zealand) and John Knight and Janice Bostok (both Australia). 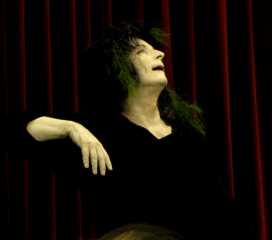 Guest speaker and performer at the conference dinner on August 17 was Don McLeod, a butoh dancer, mime and actor.

While the butoh performance may have been challenging (I think we all got the frog jumping in the pond at the end, though), the speech afterwards was enchanting. “Stop me if I go on too long,” Don said. “I don’t get to talk a lot as a mime.” Don has appeared in Blade Runner and The Howling and has just finished filming an episode of CSI where he was cast as a living statue (another of his professional abilities). 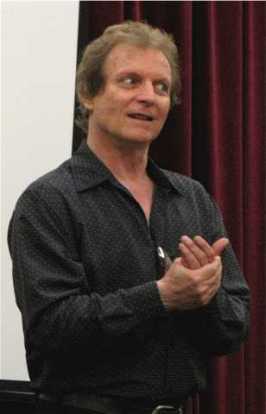 Don McLeod as himself.

Farewells were fond, thanks were sincere, tears were shed … friendships were formed, laughter was infectious and we all had haiku in our hearts. Thank you Naia, Debbie and team.

The next HNA will be in 2015 in Schenectady, upstate New York on the campus of Union College. The dates are October 14-18, timed to coincide with the beautiful autumn colours in the area. The organising committee comprises John Stevenson, Yu Chang, Hilary Tann and Tom Clausen, all members of the Route 9 Haiku Group. 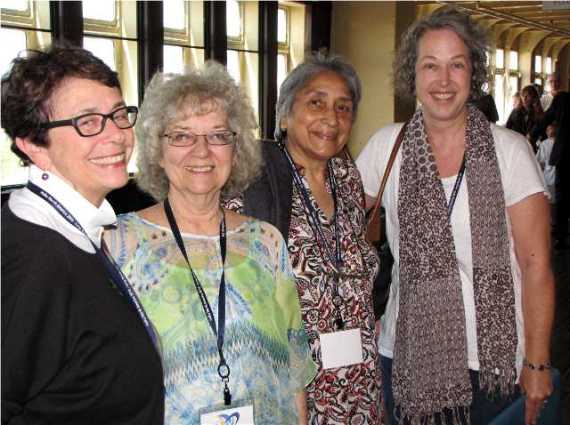 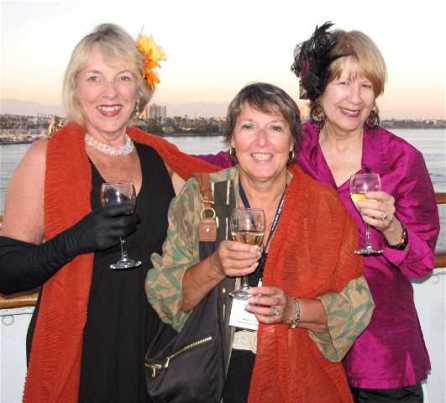 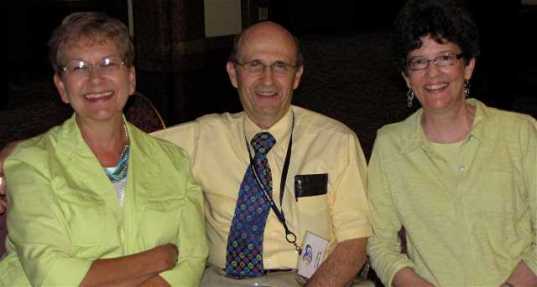 From left, Karen and Gary Hotham and Cherie Hunter Day.