Press Release: Announcing the Winner of The Kathleen Grattan Prize for a Sequence of Poems 2017

The Kathleen Grattan Prize for a Sequence of Poems

International Writers’ Workshop (IWW) is delighted to announce that Janet Newman is the 2017 winner of The Kathleen Grattan Prize for a Sequence of Poems for her sequence, Tender. The $1000 prize was judged by respected Auckland poet Robert Sullivan.

Tender is a seven poem sequence about Janet’s father, Doug Newman (1919-2008). The poems show him as a farmer, a former WWII soldier, and in old age, revealing both his tough exterior and a covert tenderness. By tracing his life from her childhood to his death at 89 years, the sequence explores the ways in which war invades the lives of veterans and their children.

Ms Newman, a member of IWW since 2012 and a runner-up in The Kathleen Grattan Prize for a Sequence of Poems in 2014, was born in Levin and raised on a dairy farm at Koputaroa in Horowhenua. She completed a Certificate in Editorial and Publishing at Wellington Polytechnic and worked as a journalist in Lower Hutt, Christchurch and Perth in Western Australia before returning to Koputaroa where she now lives and runs the family farm. She has a Masters of Creative Writing from Massey University and is presently a PhD student at Massey. Her critical and creative thesis looks at New Zealand’s long history of environmentally oriented poetry, and includes a collection of original ecopoems.

Runner-up is Anne Hollier Ruddy of Orewa who began writing poetry in 2006 and has been a member of IWW since 2011. Her poems have appeared in various Australian and New Zealand anthologies, as well as Shotglass Journal, Cordite Poetry Review and Blackmail Press. Her sequence of poems, Ambushed by Gauguin, begins and ends with a reflection of the Mother and Child theme in art with other poems in the sequence exploring it personally in biographical terms.

Mr Sullivan said writing poetry is a journey of discovery and is timeless, whatever the style. He said when writing poetry to think, “Is there an accent on what really matters and not just the right word in the right place?” Of the winning and runner-up sequences he said the poets have submitted their inner hearts. The sequences were new and original, exuded honesty and ‘show, not tell’ while disclosing some aspects of the narrator’s character as well.

The Kathleen Grattan Prize for a Sequence of Poems has been made possible by a bequest from the Jocelyn Grattan Charitable Trust. It was a specific request of the late Jocelyn Grattan that her mother be recognised through an annual competition in recognition of her love for poetry and that the competition be for a sequence or cycle of poems with no limit on the length of the poems. It is one of two poetry competitions funded by the Trust, the other being the prestigious Kathleen Grattan Award run by the publishers of Landfall magazine.

This is the 9th year the prize has been contested. Previous winners are:

2016: Michael Giacon for Argento in no man land

2013: Belinda Diepenheim for Bittercress and Flax.

2012: James Norcliffe for What do you call your male parent?

2011: Jillian Sullivan for how to live it

2010: Janet Charman for Mother won’t come to us, and Rosetta Allan for Capricious Memory.

International Writers’ Workshop NZ Inc was founded in 1976 by poet Barbara B Whyte and meets on the first and thirds Tuesdays of the month from February to November in the Lindisfarne Room at St Aidans Church, 97 Onewa Road, Northcote.

IWW’s main aim is to inspire writers by means of workshops and competitions across fiction, nonfiction and poetry. 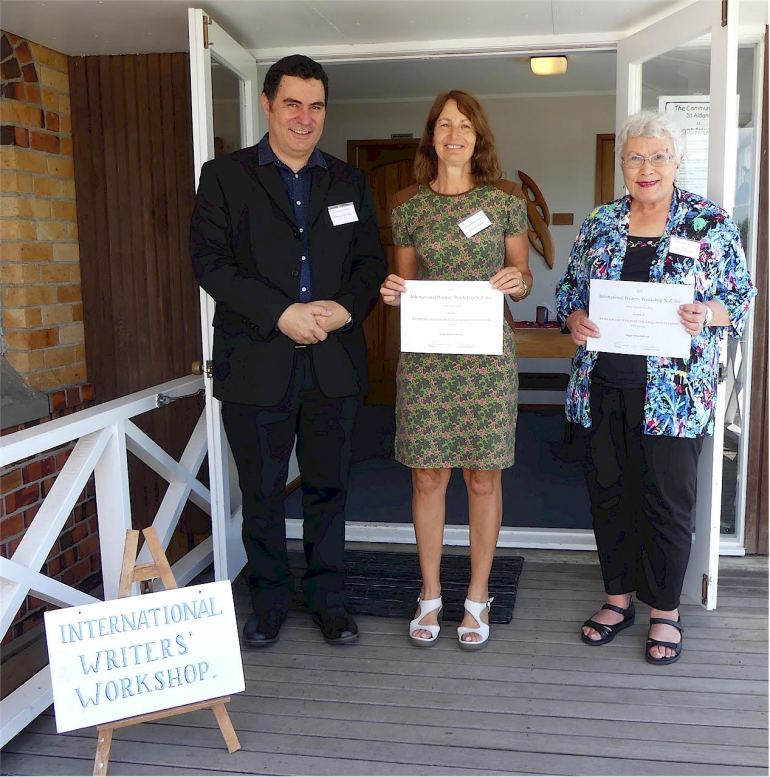